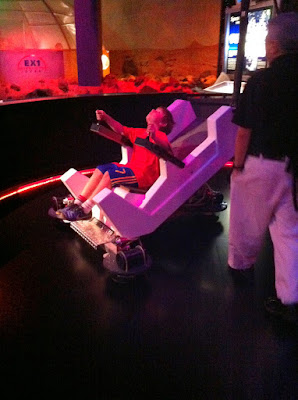 I sadly missed most of winter break last week due to a last minute business trip, but I managed to pull my jetlagged self out of bed to take my kids to their museum of choice on Friday. I drew the line at playing outside in the freezing weather in my weakened state (it was warmer in Shanghai for pete’s sake). My son chose The Tech, but he often gets it mixed up with the Children’s Discovery museum where they hand out free pedometers. The Tech Museum is always a favorite of mine, it never seems to get too crowded, the kids aren’t as rowdy and, given the amount of $$ my company has donated, there’s always a chance of discount if I flash my badge.  Having grown up in Silicon Valley, and worked in the semiconductor industry for most of my career, I see familiar sites and names, including the Applied Materials sponsored “Spirit of American Innovation,” which warms my sometimes complaining heart.

Given our tight schedule and remembering my younger son’s past reactions to IMAX movies (namely crying at the dark and noise), I managed 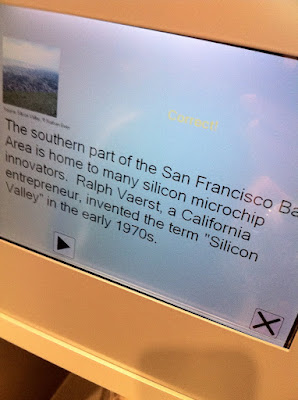 to talk them out of that, but Body Worlds was still around. Early on when it was packed, I opted out. I have a hard enough time talking my kids into new activities that don’t involve sports when they don’t have to wait in line. Plus I’m cheap. I looked at what I would have spent had I been around all week, though, and decided to shell out the extra cost for the Body World exhibit, not really knowing what to expect, but remembering it was controversial. I did have five minutes of confusion between the IMAX Human Body movie (“Parental Note: Topics include human reproduction from conception through birth” – snicker).  I’m not what you call a protective sort of parent, having purchased (although not yet read) “Where Did I Come From?” for my kids and allowed them to watch Bourne Identity. Like most boys, poop and penis rank high among their favorite words, although it’s my older one who drives us all crazy (including his younger brother) with his potty mouth.

So with one kid wanting to go (not the potty mouth, go figure) and the other more reluctant, in we went.  No waiting, just some meandering through a maze of McDonald’s eating school children on a field trip. Upon entering were were faced with sculpted female torsos. The kids were a bit taken aback, and giggled at the “nudity” but I loved that my younger son ran up to one and exclaimed “she’s pregnant” and then another to say “she’s had the baby.” The next room was where it got a bit wild. The hanging male genitalia everywhere was far outweighed by the muscles, the bones, the skinned bodies everywhere. One son was fascinated, in awe and asking questions. The other just could not handle it, I could see him getting more and more freaked out and I couldn’t blame him. I would have been the same way as a kid, and only kept a game face for the sake of my children. I held him close so his brother could enjoy and learn. I swear the most fascinating thing for my kid was the movie showing a constricting artery, which he begged to watch over and over. He still talks about the slices of thighs from an obese and non-obese person, which bodes well for his future health. He got his internal organs a bit confused, both the real ones and the stuffed ones in the gift shop, but given his curiosity and complete lack of being grossed-out, I’m sure he’s got the makings of a doctor. It’s interesting how I see so much of his dad in my older son, but when it comes to what frightens him, he’s a total mama’s boy.

The rest of the trip went much more smoothly, as we improved solar power efficiency and wind power, navigated space boosters and rode on a roller coaster designed by a sweet little girl. I even “virtually” beat my son at arm wrestling, although he handled the defeat well. For a taste of Silicon Valley history, interactive activities and a most excellent portabella mushroom burger head on over to The Tech Museum, they’ll even tweet you back.

we respect your privacy and take protecting it seriously

If You’re Going to See One Movie this Year, Frozen 2 is It

Disney on Ice Skates Back to the Bay Area Next Month

Lunch at Gott’s with a Cheesy Lifehack

If You’re Going to See One Movie this Year, Frozen 2 is It

Disney on Ice Skates Back to the Bay Area Next Month

The Best Family Fun Activities at the Presidio

Yes, Disney’s Aulani is Worth the Money

Road Trip: The Pilgrimage to The Pioneer Woman

Road Trip: Adventure Through Some of the Middle States

Tulip Fields Without a Flight to the Netherlands